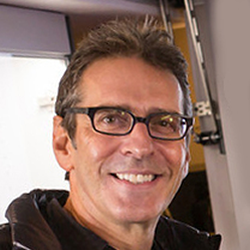 Brian grew up listening to the great harpsichord and piano music of the 18th and 19th century. His mother was a concert pianist and music educator who started giving him lessons at an early age. By 15 he was accompanying choral groups and played the celeste with the Hartford Symphony for the Hartford Ballet’s production of the Nutcracker. After that, he began writing music and songs, and upon graduating from Hampshire College, was signed as an artist with Columbia Records under the name Iam Siam. In 1998, along with Yoko Ono Lennon, Brian created the first version of the Lennon Bus and has since devoted his time to expanding the project around the world. Today, Lennon Bus Europe and Lennon Bus U.S. provide young people with free hands-on opportunities to create original digital media projects including music, videos, short films, documentaries, game apps and livestream productions reflective of their ideas and concerns. In support of the Lennon Buses and programs, Brian has developed sponsorships with Apple, Montblanc, Sony, Gibson, Yamaha, Avid, True Religion, Audio-Technica, Genelec, SSL, Neutrik, Musiciansfriend, Newtek, SESAC, Jamhub, SBK, and many more. Imagine Peace!