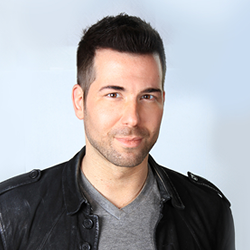 In 2001, recording engineer Steven Slate created his first drum sample in Boston, Massachusetts.  He had converted an old warehouse into a recording studio and hung planks of birch wood around the room in order to create the perfect drum room ambiance. Four years later, he made his way to Los Angeles where his collection of drum samples would find themselves in the hands of some of the industry's top producers and mixers.  And so began a career that combined his passion for creating with his passion for music and audio.

By 2008, Slate was the CEO of two companies, Slate Pro Audio, which owned his drum software brand and boutique hardware brand, and Slate Digital, which was a partnership between Slate and expert DSP algorithm designer Fabrice Gabriel.  The two met at an AES show and realized that they shared a common concern; audio mastering was severely ruining the dynamic range of music.  Their first product, the FG-X, which won them several awards, combat this problem by offering a unique way to increase the loudness of mixes while retaining their dynamic impact.  Soon the pair guided Slate Digital into a new domain: Precise digital modeling of classic analog hardware.  Slate Digital's analog modeled products include recreations of vintage recording consoles, tape machines, and compressors.

In 2012, Slate Pro Audio launched what SOS magazine claimed "will revolutionize the way we work and interact with our DAWs".  The RAVEN series of multi-touch production consoles allow audio engineers to control their DAW in a classic console workflow, using a state of the art multi-touch screen and proprietary software.

In 2014, Slate Digital revealed once of its most exciting products to date, The Virtual Microphone System, which promises to model dozens of vintage microphones via digital modeling. It is due out in June, 2014.

In conclusion, Steven Slate's innovative brands aim to help audio engineers do their job with more efficiency, creativity, and fun.